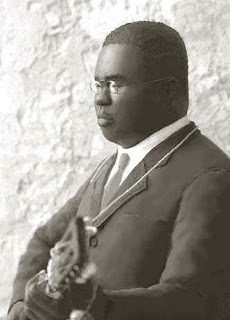 "Blind" Lemon Jefferson (September 24, 1893 – December 19, 1929) was an American blues singer and guitarist from Texas. He was one of the most popular blues singers of the 1920s, and has been titled "Father of the Texas Blues".

Jefferson's singing and self-accompaniment were distinctive as a result of his high-pitched voice and originality on the guitar. He was not influential on some younger blues singers of his generation, as they did not seek to imitate him as they did other commercially successful artists. However, later blues and rock and roll musicians attempted to imitate both his songs and his musical style. His recordings would later influence such legends as B.B. King, T-Bone Walker, Lightnin' Hopkins, Canned Heat, Son House and Robert Johnson.
Blind Lemon Jefferson was born blind near Coutchman, Texas in Freestone County, near present-day Wortham, Texas. Jefferson was one of eight children born to sharecroppers Alex and Clarissa Jefferson. Disputes regarding his exact birth date derive from contradictory census records and draft registration records. By 1900, the family was farming southeast of Streetman, Texas, and Lemon Jefferson's birth date is indicated as September 1893 in the 1900 census. The 1910 census, taken in May before his birthday, further confirms his birth year as 1893, and indicated the family was farming northwest of Wortham, near Lemon Jefferson's birthplace.Write on our Facebook Wall or post your Photos of great blues events! -  Here